Quickly on board and our baggage stored we were soon offered pre-departure drinks, and amenity kits, and menus. It was clear that my travel companions were as excited as I was at our holiday over the Atlantic. I had already looked through the menu online and had preordered my main course, but it was good to look again and see what is on offer.
Boarding seemed very rapid and it was not too long before we heard the annoncement of boarding complete.
We were soon welcomed on board by the Captain, and were reminded about the BA seatbelt policy. I looked as my watch as the departure time arrived and we pushed back bang on time. We then taxied to the end of runway 27 L and waited for our chance to take off.
It was only the second time I had taken off in Club World in a forward facing seat. So it felt a little weird. But we took to the air and soon set course to the northwest flying over Gloucester, and Abersoch and Dublin before heading out over the atlantic.

The crew were soon an their feet and offering us our first drinks, a Gin and Tonic please. It was not too long before I had my tray infront of me with the two starters I had ordered, the Salmon and the Soup.  Both were excellent. I then had the Chicken main dish and some cheese and the chocolate tart for dessert. I know piggy me, but it was all good. 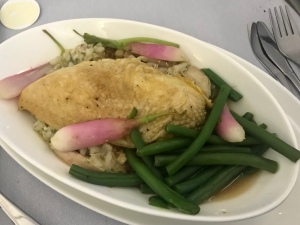 What is that empty glass? 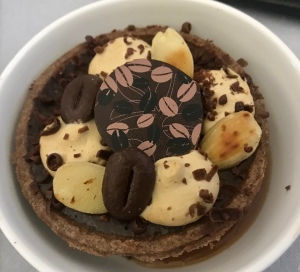 This was the first time I had flown on the 787 and was impressed with the sense of space on the plane and the view from the huge windows.
I then settled down to watch Tolkien the screen but unfortunately fell asleep, even though I was really enjoying the film.
As we ere arriving after 18:00 local time the Afternoon tea was simplified and did not have scones…
We crossed the over the the coast near Emily Harbour and then continued south west till we followed the St Lawrence River to Quebec City and on towards Montreal. We passed Montreal and the airport looping round Beauhamois to land on runway 06L.

It was then a short taxi to our stand.
The service had been great throughout, with lots of chat and really felt welcomed on board, and nothing was too much trouble for this crew.